Its been some time i posted a entry here . I wanted to change my aging Logitech Notebook mouse which i purchased when i got my Dell XPS 1530M 2 years back , The mouse is still working , really a awesome product from Logitech. But off lately , there has been some issue with clicking. so anyway wanted to move on to something new , So after a long search I wanted to get Logitech M505 , even though its available in India , it cost around 2100Rs , but when got through Ebay from U.S , it cost me around 1500Rs including shipping , anyway its not about the money , i wanted to dissolve some money .. 🙂

Coming to the product , The mouse is really small , same , but slightly bigger than my notebook mouse .The mouse has laser as apposed to the usual optical. Laser is slightly better than optical in precision, noticeable and useful for person who work on photoshoping and gaming. The mouse has a flip open cover , into which two AA battery goes neatly , there is small switch on the back, which opens the hatch , so cool.

There is also a small provision for the Unifying USB . Unifying USB is the latest from Logitech which uses one of the USB and to it you can pair numerous wireless products of Logitech like this mouse , and their wireless keyboard and other products. This is really handy for those who have limited usb provision.

The installation process was very smooth on Windows 7 , the Os pulled the required drivers and accompanying software from Windows Update. Anyway i download a software called Setpoint (Version 6) , which allows you to modify other setting and buttons of the mouse. The Mouse comes with a cool scroll sideway feature , where the scroll button can be clicked on sideways , particularly useful if you program it to move the page up/down , so it eventually eliminated the scrolling and with just click of the scroll button to the side will result in page scrolling , couple this with Firefox “yetanothersmoothscrolling” add-on , makes browsing a pleasurable experience .

the mouse overall is slightly heavy , may be after using the almost weightless Logitech Notebook mouse , this is pretty heavy. It works on all surface. But anyone who is moving from another mouse will have to tweak the Mouse pointer speed and other setting to get used to . When the mouse is used with surface such as table or normal magazine , the mouse is really very responsive and precise. As i use it on the bed , it is pretty much lagging .. mainly because of its weight and also since i was used to weightless mouse. It will take some time .. this is the usual case with any change . It takes time….

Anyway will leave now with few pictures of the mouse 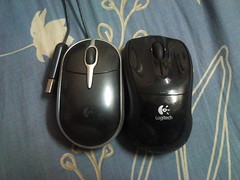 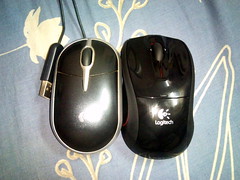 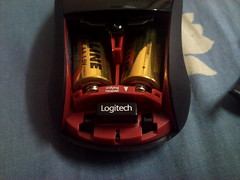 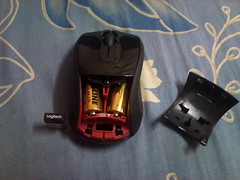 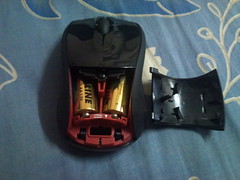 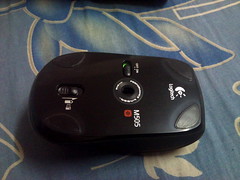 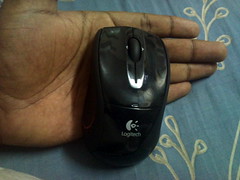 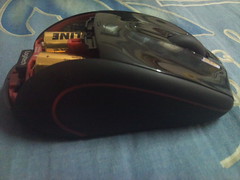 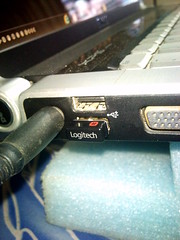