Be careful while using Paypal and Ebay.com

Recently I made a purchase on ebay.com (not .in) and paid via paypal.

Well everything was fine , but this was the first purchase i made after linking my debit card. I didnt follow the transaction as seller gave me a tracking ID , which was working fine , until suddenly it said ” Sender asked the item to be returned” , i tried contacting the seller , and it took some days for the back and forth conversation. He was saying that he got a email from paypal saying not to go ahead with the shipping as the payment of mine was kept on hold.

Note : Paypal might with hold your transaction if it find something fishy and MIGHT NOT TELL YOU THEY DID THAT !!!

So on 25th of sept , the order status changed to “Cancelled” on paypal transaction page. 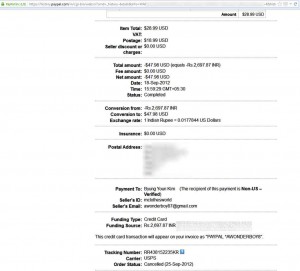 I contacted the seller , and he was saying this usually happens and when he recieves the payment , he would immediately ship the item.

Since I havent used dispute much , I opened a dispute on 2nd of this month , and later found that only if i close the dispute , the payment would go through , so on 3rd i closed the dispute. Even while closing the dispute , there was no warning , that i cant reopen or start a new dispute for this transaction. Also it should be noted that in any given time , i havent ordered or asked paypal to withold the payment to the seller , it was done by paypal.

After some furious phone calls and repeated confirmation that payment has gone through , seller still denied he received the payment. Last PM i got from him was 18th of this month and still now there is no response.

Here are few things that makes me even more furious. Ebay.com , if you bought via paypal , sends all the dispute/resolution part of the buying to paypal.

So dont start a dispute or close the dispute just like that. Get an email / dispute comment confirmation that you are closing the dispute after the seller has agreed to send the item.

Lastly , Dear paypal , your One Transaction – One dispute Policy SUCKS!!